From retail and restaurants to tech and media, contractors to coworking spaces, large, small, and everything in between, a diverse array of businesses call Alexandria home. In our new blog series, Growing in Alexandria, we will sit down to talk with businesses around the City to learn more about who they are, what they do, and why they love it here. Have an idea for a business to talk to? Email us!

December brought us to The Hour, a staple King Street shop that features curated collections of vintage barware and cocktail glassware, where we sat down with owner Victoria Vergason. 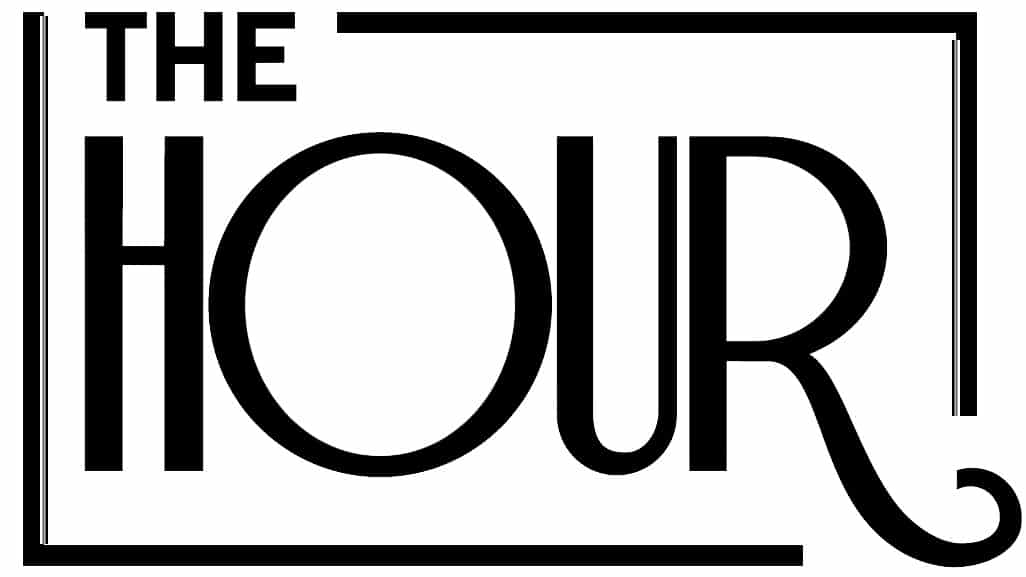 AEDP: Tell us about your business. How did it get started?

Victoria: I created The Hour almost 10 years ago.  My youngest children had just entered kindergarten at Lyles Crouch and I was ready to put my business hat back on.  However, I knew I could not re-enter the world of international finance (where I had started my first company) due to the amount of travel I had experienced throughout my prior career.  Loving a good challenge, I thought starting a local retail business would be a completely new business challenge for me (especially creating a new “concept” store) and one that would allow me to maintain a healthy home life as well.

While I love my family, I also love to entertain, and I truly love great design.  For me, I knew there could be nothing better than opening a store dedicated to entertaining at home (with cocktails, of course), and one where I would be surrounded with beautiful items throughout the work day.  As I was walking to my husband’s office on King Street in October 2008, I passed a beautiful store that had been a vintage poster store but was now up for sale.  I thought, the late 19th Century building (with its two bay windows that jutted out into the sidewalk) would be the perfect place to open my new cocktail store.  The age of the building fell in line with the story I would tell about the history of cocktails and the glasses that served them (better yet, the building was only two blocks from home!).  I quickly made an offer on the building and soon found that I had purchased my first commercial property.  A week after closing, the recession hit and I truly wondered what I had gotten myself into.

The idea behind The Hour was to create the first cocktail supply store (minus the alcohol) much the same way Williams & Sonoma had crafted itself into being a kitchen supply store only.  My goal was to offer a small selection of vintage cocktail wares (that I began collecting years ago when I was in business school) with most of the store’s products coming from new items I would find at trade shows.  After realizing that most of the new glassware and barware I found at market was made overseas and all looked the same, I quickly changed course and decided that The Hour would be mostly made up of my vintage items with a smaller selection of curated new products that I felt had enough style that I would want to use them in my own home.  With the recession well under way, I discovered that the timing of my new business launch could not have been better… more people were drinking cocktails, and sales took off! 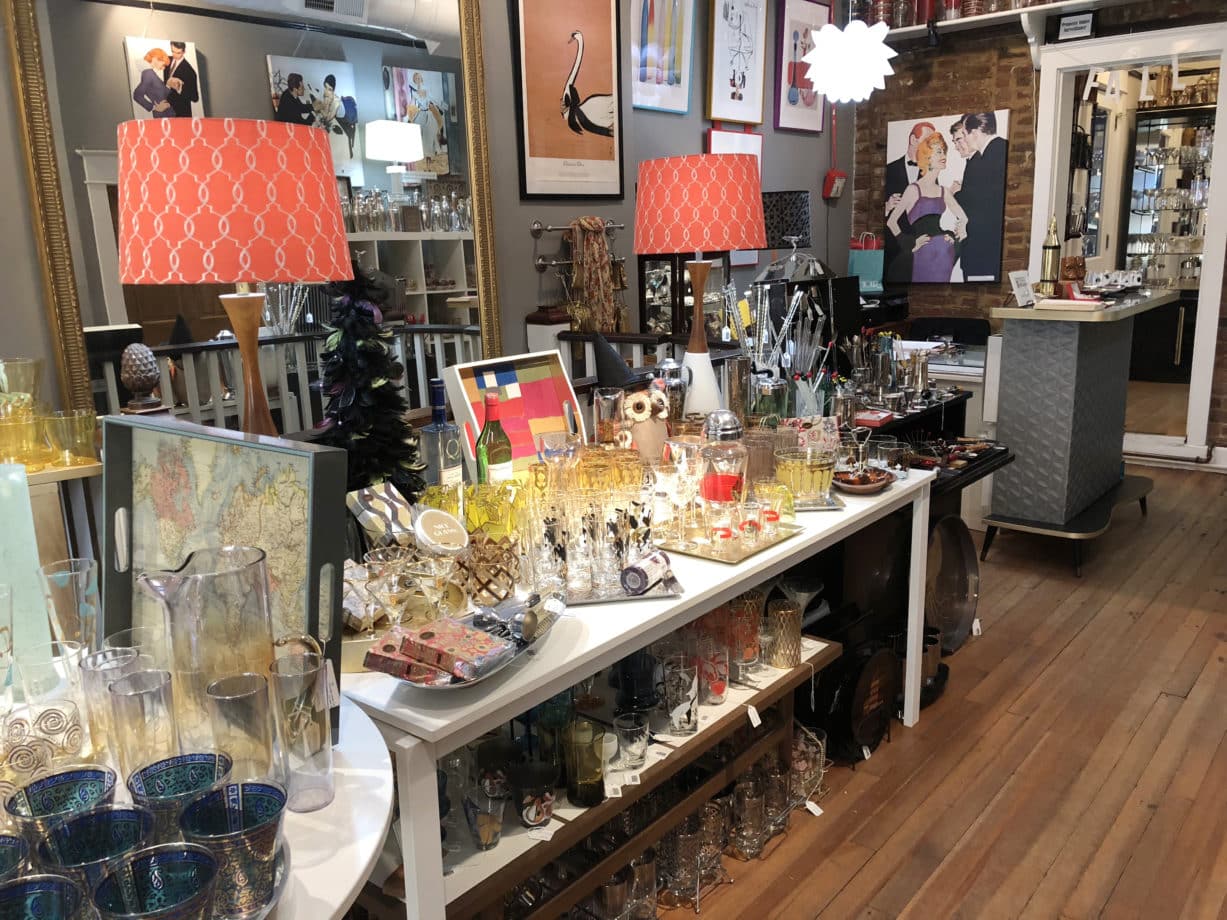 Victoria: Prior to arriving in Alexandria, I spent several years in New York City and loved the energy and vitality of that city.  I moved to Alexandria in 1998, seeking a smaller urban environment to raise my family but one where I could continue to walk to great restaurants and shops.  Years later, when I decided to open The Hour, I knew Alexandria was the perfect place for my retail store.  Our city’s rich history coincides well with the history of the cocktail and the products I sell (I am a preservationist at heart).  The business community is also full of a great number of female entrepreneurs in both the retail and service industries who are a great source of inspiration, motivation and counsel.  In addition, at the time, the store’s proximity to D.C. and the area’s burgeoning craft cocktail scene was a definite plus.

AEDP: What is something that no one knows about you?  About your business?

Victoria: While most people know just how much I love my family, many do not know that three of my four children are triplets!  Until they entered kindergarten, I was a stay-at-home Mom (who also kept my business acumen going by serving on four non-profit boards).  Once the triplets entered Lyles Crouch, I knew it was time for me to head back to the business world.  I thought running a local business could never be as hard as raising three little ones and a teenager at the same time!

As for my business, many people do not know the inspiration behind my store’s name The Hour.  As I was forming the store, my best friend told me about a book entitled The Hour written in the 1950s by Pulitzer Prize winner Bernard DeVoto (DeVoto’s wife was one of Julie Child’s best friends at the time).  In the book, DeVoto espoused his belief that one of America’s greatest inventions was the development and promotion of the cocktail, especially the Martini.  Once I read the book, I knew that it would only be fitting to name my store after the book.  I do love things with a good story behind them!

AEDP: What is the best piece of professional advice you have received?

Victoria: About three years after I opened The Hour, I realized that my business was going very well.  I had so many ideas for the store’s growth but was unsure what to do next.   An employee of mine referred me to a family friend of hers who helped small businesses grow to the next level.  After a consultation with this family friend, I was referred to “an expert” in the retail industry who quickly took me under his wing.  His advice to me was to always be looking for the next big idea, but to take things one step at a time when growing a business and to always be willing to adapt.  As craft cocktails could be found in most urban environments at the time and the interest in craft cocktails was on the rise, he advised me to grow my store by opening boutique versions of The Hour in larger commercial stores across the U.S.

Within 4 months, The Hour opened its first “boutique” in Neiman Marcus, Beverly Hills, CA.  Shortly thereafter, I opened several more stores throughout the country and discovered that cocktail tastes (and glassware needs) varied widely depending upon geography.  Those on the West coast preferred to drink their cocktails out of rocks glasses and highballs whereas those on the East Coast and in the Mid-West liked cocktails served in coupes and other stemware. 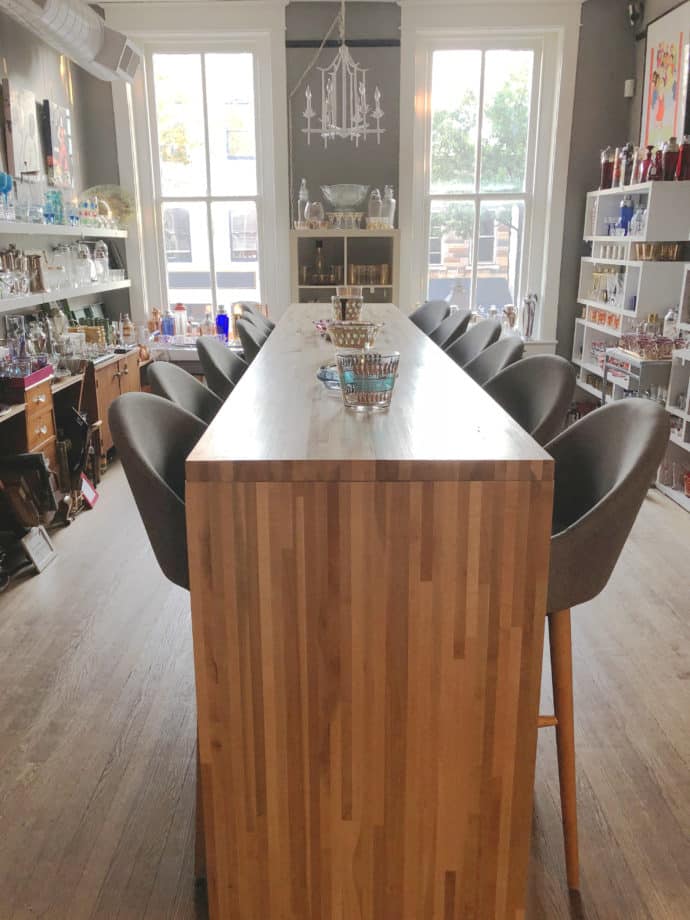 While my relationship with Neiman Marcus continues to this day, I have taken my mentor’s sage advice and have continued to adapt the nature of my store as the nature of retail has changed.  As e-commerce has grown, I have developed and continue to grow my online retail presence.  I engage in all forms of social media for marketing purposes.  And as the “experiential store” is the new way to attract and retain customers, I have created a new community space within The Hour’s King Street location where I will hold classes and events and offer the space for private use in the near future.

Victoria: I’ve got two big projects I am working on right now.  The first one just launched.  As I said earlier, when I initially opened The Hour, I wanted the store to be primarily comprised of new products with just a small portion of goods sold being vintage in nature.  Since most of the new items I found at market were and continue to be nondescript and mass produced overseas, it has been my dream for years to create my own line of stylish barware and glassware that would be primarily made in the U.S.  I searched for years for vintage glass molds these companies used to make glassware here in the U.S. in the hope that I could resurrect some aspect of U.S. glassware manufacturing (from the 1920s to the 1970s, there were hundreds of glassware manufacturing companies located in America). 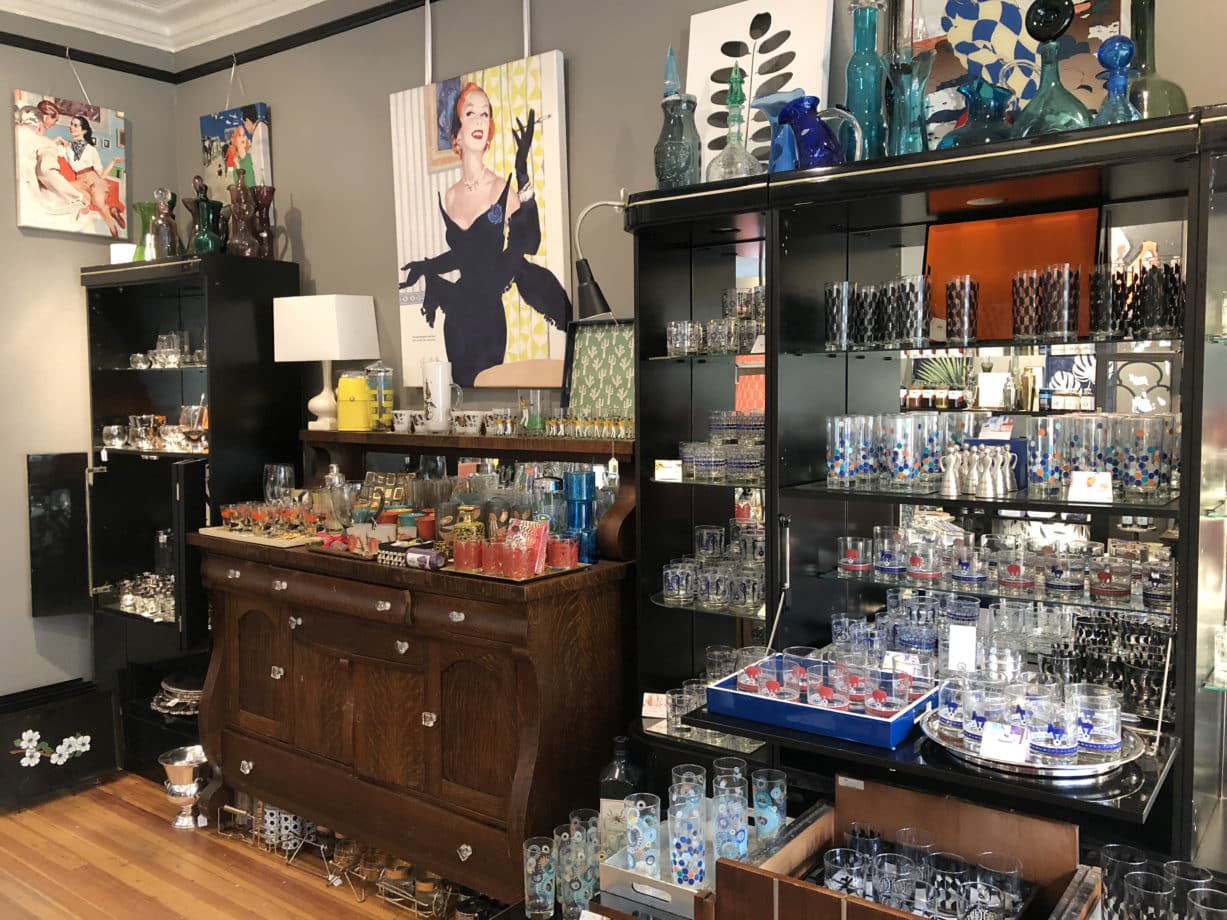 As I discovered, most of the U.S. glassware companies sold their steel molds as scrap metal in attempts to pay their debts before being driven out of business by the late 1970s.  Only two American glass manufacturers exist today, and the costs for creating new steel molds are too price prohibitive for any small business to undertake.  As such, I decided that I would utilize a mid-century idea and create my own decorative patterns that could be placed on standard blank glass.  I found an American company to work with and started producing glassware designs over the summer.  The new glassware is truly made for the modern home bar as it is dishwasher safe and chip resistant.  At the same time, I also sought out U.S. metal manufacturing companies that could help me create my own line of barware at affordable prices.

In September, I officially launched my new line of barware and glassware as an e-commerce business, The Modern Home Bar.  I am also entering the wholesale market with this new line which creates a new business challenge for me to learn!  Products from The Modern Home Bar can now also be found at The Hour.  Finally, with The Modern Home Bar, I decided to also offer my design studio services to bars, restaurants and others in the cocktail/hospitality industry seeking to develop their own glassware products for use in their businesses. 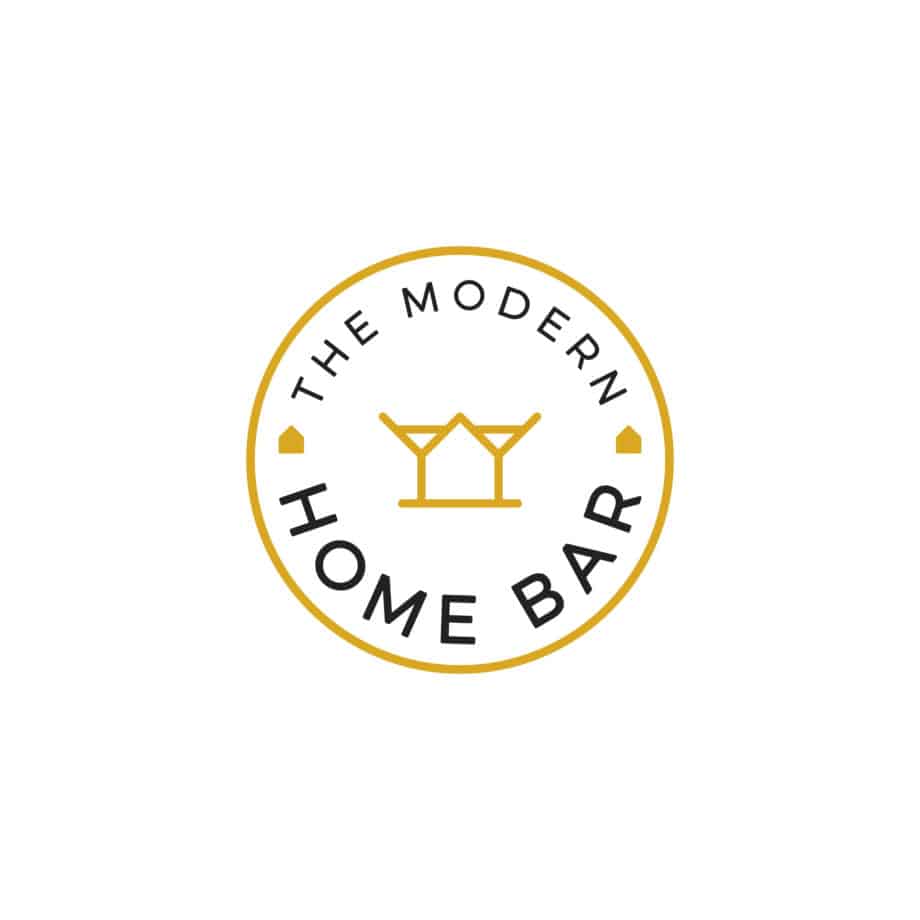 My second big project is more local in nature.  I am currently writing my second cocktail book.  This book will be modeled after my first book, Capitol Cocktails, where I showcased all aspects of the DMV’s cocktail culture, from bartenders and bars, to distilleries and vineyards, to the farmers markets that provide fresh ingredients.  My new book will be entitled Old Town Drinks and will focus on the best watering holes located in and within walking distance of Old Town Alexandria where one can get a craft cocktail using local Virginia ingredients.  All the cocktails, of course, will use vintage barware from The Hour and be served in a selection of The Hour’s vintage glasses.

To learn more about The Hour, please visit their website or stop in for a visit at 1015 King Street.