From retail and restaurants to tech and media, contractors to coworking spaces, large, small, and everything in between, a diverse array of businesses call Alexandria home. In our blog series, Growing in Alexandria, we will sit down to talk with businesses around the City to learn more about who they are, what they do, and why they love it here. Have an idea for a business to talk to? Email us!

The second month of 2019 found us visiting with Green Buzz Agency, an award winning, full-service video production company that specializes in dynamic corporate video and authentic documentary shorts. We chatted with Tod Plotkin, Principal at the agency.

Tod: We just found out that we are going to expand on a current project we are doing with TEGNA and Facebook Watch called “An Imperfect Union.”  It is the #1 rated show on Facebook in the news division.  We did an 18-episode run with them that ended in December 2018.  We just got word that we are doing another 34 episodes that will run through August 2019.  The show is essentially about very controversial issues – gun control, DACA – and taking two people with diametrically opposed views on it and having them come together and do a community service project.  While they are doing the community service project, they discuss whatever it is that they differ on.  The show is great because it shows that people of opposing views on hot button issues can have a civil discussion when they meet face to face.  It also shows that we are all here to give back to our community and make it the best it can be.  The episodes air on Wednesday nights at 9 pm ET on Facebook Watch.  We get about half a million organic views per episode.  The longer 7-8-minute version of the episodes are on Facebook Watch, but then a 90 second version also airs on the local TV networks owned by TEGNA.  It is a unique project for us given its dual platform distribution and is very exciting. 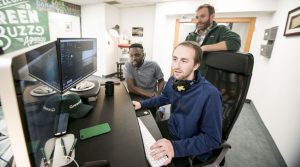 AEDP: How do you measure success?

Tod: I know that a lot of businesses measure success by revenue, number of employees, how they are expanding.  Our success is measured by whether we are working with amazing clients and creating compelling stories that has an impact on society and pop culture.  For example, we are creative partners with Upworthy.  We get to tell these amazing, aspirational, emotional, uplifting stories on big topics; our team is energized by that.  Our team knows that when they are making a video about transgender children and bathrooms and when Obama talks about this topic, it is our video he comments on.  When those things happen, we know we are having an impact on society.  That is success to us.  People here are energized by having their work seen, like any artist they want it to be seen and have an impact.  We take on projects we care about, do an amazing job and that opens more opportunities for more complex and bigger budget projects.  We work with a lot of nonprofits that do not have big budgets.  We did the disaster fundraising relief video for American Red Cross for the hurricanes in Houston and Florida.  The budgets were small compared to a Fortune 500 company, but you know that the visual content is going to compel people to donate to a good cause. 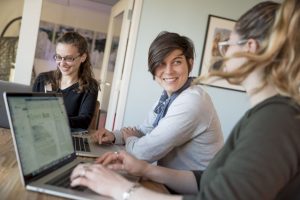 AEDP: Where do you see your business in the next year? In the next five years? The next ten years?

Tod: As of right now, 100% of our revenue generation is from being commissioned by brand and media clients.  It would be great if we could launch our own Green Buzz content and share our unfiltered voice with the world.  We would love to point to something and say that it is Green Buzz content and this is how we tell stories.  We do a lot of documentary content and a lot of motion graphics, corporate content – and we love to do those things – but we would love to do more in the narrative space with actors, comedy and podcasts.  We are working on our first ever project that would be agency driven.  It will be a podcast in partnership with Women 2.0.  We have the expertise with storytelling and they have the expertise on the topic we want to talk about.  They also have a distribution network to get our story out there into the world.

AEDP: Do you have a favorite charity that you support?

Tod: We do a tremendous amount of work with Make-A-Wish Foundation.  We have had a lot of success with them and that has opened the door to work with other organizations.  We have been nominated four times and have won three Emmys with them.  We have been nominated for 2 Webbys with them in very competitive categories – sports and general documentary.  We were competing against the likes of Nike, Sports Illustrated, Buzzfeed and CNN.  In order to get the recognition at the national level with the size of budget we had, you have to work with an organization that is very smart, has really good stories and allows you the creative freedom to tell their story in a dynamic manner.  They use our video as the hook at the end of their fundraising galas to get attendees to donate.  There has been a huge increase in donations since they started using our videos.

Tod: We were previously at 16th and L NW in Washington, DC, but we have always been a fan of the shops and restaurants in Old Town and it is affordable.  Given the rental prices, we have been able to grow and have the studio spaces that we need.  Additionally, parking is easier in Old Town, our office has a view of the water, and we are only an 8-10-minute walk from the metro and the waterfront.  We have a lot of young folks, a handful who live in DC, and I have never heard a negative review of the office space.  We moved to this building in August 2013 and have been moving around several different floors as we expand and outgrow the space.  We actually just expanded to the 6th floor.  We also have two smaller offices in South Williamsburg, Brooklyn and one in Burbank, California.